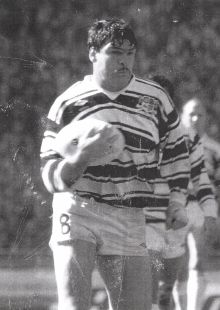 Trevor Skerrett was one of few outstanding GB Representatives on the 1979 Lions Tour and he had had a good game in the 1979 Challenge Cup Final for Wakefield.

Hull obtained his services during the summer of 1980 for a world record £40,000 and he became another part of Hull’s outstanding 1980’s team.

Some of his early games were in the second-row, but it was at blind-side prop where he really made his mark. He was a big man and well equipped to dominate the contested scrummaging existing during those years.