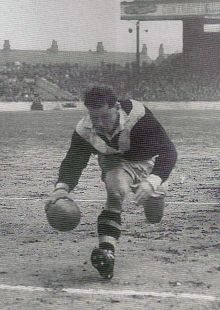 Nicknamed ‘Bomber’ Harris, Tommy was a hooker way ahead of his time who would have been a smash hit in the modern game.

Winning the scrums was a priority for a hooker during his era but he added a new dimension to the position with his all round abilities.

His explosive running against the big, lumbering forwards of that era made him devastating.

Harris was small, compact and muscular which almost cost him his chance at Hull because they were keener on signing another Welshman, burly prop Bill Hopkins, who went on to work in the Hull Daily Mail press room on Jameson Street.

One trial game was enough for Harris to convince the directors of his talent and they signed the Newbridge rugby union hooker, whose father had told him he would be better off going down the mine than playing professional rugby.

Switching to rugby league was a decision he never regretted as he went on to make a record 25 Test appearances for Great Britain as a hooker and in 1960 he became the first player to win the Lance Todd Man of the Match trophy on the losing side in a Challenge Cup Final.

Harris was one of the founding members of the great Hull pack of the 1950s and after he left the club in 1962, he went on to become coach at York for 11 years.