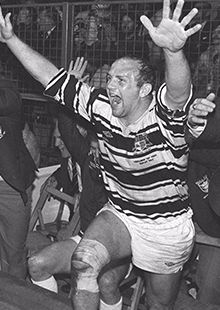 If Billy Batten had been the catalyst of Hull FC’s first golden age, then Steve ‘Knocker’ Norton was certainly in the same bracket for the great times in the 1980’s.

Having already gained test honours with home-town Castleford and toured Australasia with the 1974 Lions, he went on to gain a Grand Final winners medal with Manly-Warringah in 1976.

He returned to Castleford in 1977 and was soon on the radar of top clubs in the North of England. Hull signed him in a player-plus-cash deal involving Jimmy Crampton and he bestrode the Boulevard and every other ground in the Rugby League with brilliance.

He played in 13 finals for Hull in addition to featuring in 36 of the 46 fixtures when Hull won the Rugby League Championship in 1982-83.

Rugby League is a team game but if any team could be said to have been dragged into a final and a trophy won by the performances of one man, it was the John Player Trophy in 1982 when Steve was supreme in every round of that competition. He also scored the try that put Hull back in contention in the drawn Challenge Cup Final in 1982 and then created the equalizing try for Dane O’Hara.

Steve earned a huge testimonial with Hull and was a member of the original six legends who were selected in the inaugural Hall of Fame in 1992.