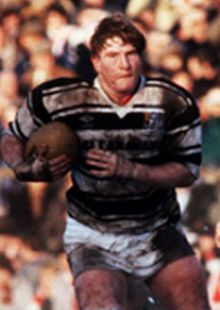 Lee Crooks in his all-too short time at Hull soon established himself among the leading Rugby League players born in the city of Hull. He attained every honour on his way to the top in the game.

In his early months, he produced a vintage performance against Leeds when he rampaged all over them for a hat-trick of tries and produced another in the Challenge Cup Replay in 1982, kicking 3 goals and scoring a late try to finally seal the game.

He was Great Britains youngest-ever forward when selected against the 1982 Australians. Despite his youth, he was fearless in the midst of battle, so much so that a bout of short temper was responsible for him creating an unwanted piece of history when he became Hull’s first player to visit the sin-bin.

He scored a try in the shock 1983 Challenge Cup loss to Featherstone and opened Hull’s account in the 1984 Yorkshire Cup Final against Hull KR with the Rovers leading 12-0 at the time.

Amidst the financial turmoil that Hull found themselves in during the summer of 1987, Hull were forced to sell him to Leeds against his wishes for a world record 150,000. His time at Leeds was not a happy one, but after moving on to Castleford in January 1990, he re-discovered his form and gave Castleford great service for a number of years until retirement from playing in 1997.