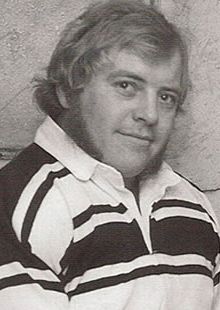 Keith may not have been a classic second-row built in the tall, long-legged body expected over the years, but he packed tremendous amounts of energy into his short, stocky frame, so much so that his charging breaks earned him the nickname of ‘Rhino’. He was a firm favourite of the Boulevard faithful.

The first half of Keith’s career at The Boulevard coincided with probably the bleakest period in Hull’s history, but he always stood out with his blonde hair conspicuous when rampaging through defences as he did. The ‘Spirit of ’75’ saw Keith play his full part in the renaissance of Hull’s fortunes as he starred in the John Player Trophy campaign in 1975-76 which saw Hull become the first Second Division team to reach the final.

His finest hour came on 13 December 1975, when his outstanding contribution earned him two tries in the tremendous semi-final victory at Champions-to-be Salford at The Willows.

He was also an ever-present when he played in all 37 games in the 1976-77 promotion campaign. He also played in 35 of the 38 fixtures in Division One in 1977-78, and was in the second-row when Hull secured the BBC2 Floodlit Trophy, beating Hull KR on 18th December 1979. However, his career was coming to a close when Hull embarked on their successful period of the 1980’s.

He was a prolific try-scorer and only narrowly failed to become only the fourth forward try-scoring centurion for Hull, behind Bob Taylor, Johnny Whiteley and Bill Drake. He was also a reliable goalkicker when required and he landed some 209, taking his points tally to 712.