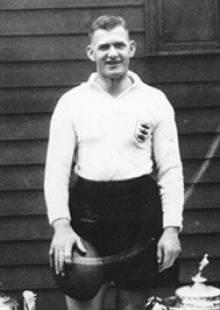 ‘Give it to Joe’ was a regular cry heard from Hull FC supporters during his glittering career with the Black and Whites.

The full-back/centre amassed almost 2,000 points for the Airlie Birds over two spells. He is the club record point-scorer with 1,842 over his 12 years at The Boulevard, fully justifying the £800 Hull paid for him to Huddersfield in October 1928.

He had just returned from Great Britain’s tour Down Under, where he played in all three Tests against Australia and one against New Zealand, when he headed to East Yorkshire, later becoming captain and the driving force behind their Championship victory in 1935-36, where he scored two tries and kicked five goals in a 21-2 victory over Widnes.

The one blot on his playing career came when he was sent off against Leeds in a Challenge Cup tie in front of a record 28,797 crowd at The Boulevard, with Hull subsequently losing 5-4.

In March 1938, he signed for rivals Hull KR and played a key part in confining the Black and Whites to two derby defeats against their arch rivals that same year.

He had two seasons at Rovers but returned to FC for a couple of seasons after the Second World War and played his last game at Dewsbury on the 7th April, 1945.

Hull FC’s famous club anthem, ‘Old Faithful’, also comes from Joe Oliver’s time at the club. Oliver was nicknamed ‘The Points Machine’ and ‘Old Faithful’ by the club’s supporters due to his consistent and prolific scoring rate.

Gene Autry released a song about an ‘old faithful’ horse in 1933 and the fans adopted it for Oliver.

The song has adapted slightly since that time but can still be accredited to his time at the club.