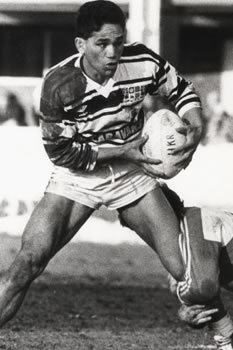 A’au James Leuluai was a New Zealand international who joined the club in 1981 with compatriots Dane O’Hara and Gary Kemble.

He was described as “a centre of the highest quality” with a famous side-step and an eye for the try-line.

Ever the man for the big occasion, he scored many memorable tries. These included a brace against Wigan at Wembley in 1985 as well as one of the greatest solo tries of all-time against Castleford in the ’83 Cup semi-final.

In total, Leuluai scored 85 tries in 184 appearances for the Black and Whites.

He returned to England in 2015 as Hull FC’s Guest of Honour as the club celebrated its 150th year and was officially inducted into the Hall of Fame.

He is the father of professional rugby league players Thomas and Macgraff Leuluai and the uncle of former Leeds Rhinos prop, Kylie Leuluai.