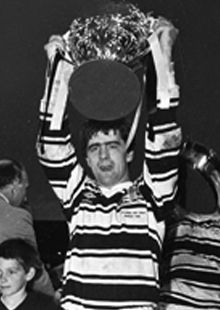 Having built up a formidable forward strength as the 1980’s dawned, Hull set about to capitalize and build up a back division to match. The priority was a quality stand-off and David Topliss, at a bargain transfer price of £15,000 was brought in from Wakefield Trinity.

David was a rarity for an off-half in that he was both a creator and finisher, and his partnership with Steve Norton was at the heart of many of Hull’s great performances over the four years of David’s time at Hull. He was also a great leader and assumed the captaincy of the team straightaway on his arrival at The Boulevard.

He had been a star at Wakefield ever since making his debut at 18 early in the 1968-69 Season. He rose to test match selection in 1973 and was flown out to Australia as a replacement on the 1979 Ashes Tour shortly after winning the Lance Todd Trophy in a losing cause against Widnes.

He led the Hull team to success in the Challenge Cup in 1982 when he was outstanding in the final (although the Lance Todd Trophy was awarded to Widnes’s Eddie Cunningham), and repeated the performance in the Replay, when he took the Man-of-the-Match award after another brilliant display in which he scored two superb tries.

That was probably his finest hour, although he went on to lead the team to Championship success the following season and also played in two winning Yorkshire Cup Finals.

He was also a giant among men when Hull almost beat the 1982 Australian ‘Invincibles’ His try before half-time, after his own chip over the full-back, established a 7-0 lead at the break, but the full Kangaroo test team asserted their power in the second-half.

His sole test appearance whilst with Hull, followed in the third test, when he was awarded the captaincy – only the fourth Hull player to have that honour bestowed.

He left in the summer of 1985 at the age of 35. His impact during his 4 years had been outstanding, both as a player and captain.