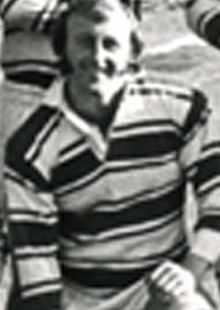 Chris was outstanding playing for the Hull & District junior teams in a tournament shown on ITV in 1963, in opposition on occasions to the great Roger Millward.

Chris was possibly the most determined and hardest scrum-half Hull have ever had, and he was certainly the best ever Hull-born.

His tenacity around the scrum base was instrumental in seeing Hull through in many games during the long periods of mediocrity. All those qualities were to the fore when he won the White Rose Trophy as Man of the Match in the 1967 Yorkshire Cup Final against Hull KR, scoring a try and kicking a drop-goal.

Although Hull lost 7-8 that day, Chris earned his winner’s Medal two years later when Featherstone were beaten in the final. A very strong and hard half-back, Chris made it seem that Hull were playing with an extra forward.

So much so that his latter days were spent at loose-forward as he lost a little pace. He has the distinction of kicking Hull’s first-ever single point drop-goal – in a 2nd round Yorkshire Cup tie against Leeds, 10 September 1974. That game was notable for Hull winning 12-8 after having two men sent off and Hull starting to walk off in protest at the refereeing.