Hull FC have unveiled their 2019 official charity jersey to raise funds and awareness for the Steve Prescott Foundation, in memory of club hero Steve Prescott MBE!

Just over 20 years since Steve made his debut for the Black & Whites, the club have brought out a limited edition retro shirt based on the design he wore in his first season at the club in 1998/99.

The shirt will be worn at Hull FC’s annual Heritage & Memorial Weekend at their final home game of the regular season, which fittingly is also the final leg of the Steve Prescott Trophy against St. Helens, another of Steve’s former clubs.

The club’s annual heritage weekend is a chance to reflect on and celebrate the many Hull FC players and supporters who are sadly no longer with us, and this year will be extra special as they pay tribute to one of rugby league’s greatest heroes.

Aside from making 107 appearances for Hull across two spells with the club, scoring over 600 points including 56 tries, Prescott is now also synonymous with his incredible charity work which lives on through the Steve Prescott Foundation.

A donation from each jersey sold will be made to the charity which raises funds for Try Assist, which aims to support players whose lives have been affected by serious injuries.

They also continue support Christies Hospital, where Steve was treated before he passed away after a courageous seven-year battle with pseudomyxoma peritonei, a rare form of abdominal cancer.

A number of high profile events continue to be organised on an annual basis, with Steve’s eldest son, Taylor, currently cycling from Perpignan to London alongside a host of familiar faces, before finishing at Wembley Stadium where he will walk out the match ball at this year’s Coral Challenge Cup Final.

Steve raised an incredible £500,000 before he passed away, whilst the Foundation has gone on to reach over £1.6 million for charity.

Fans can support this great cause by visiting - www.steveprescottfoundation.co.uk 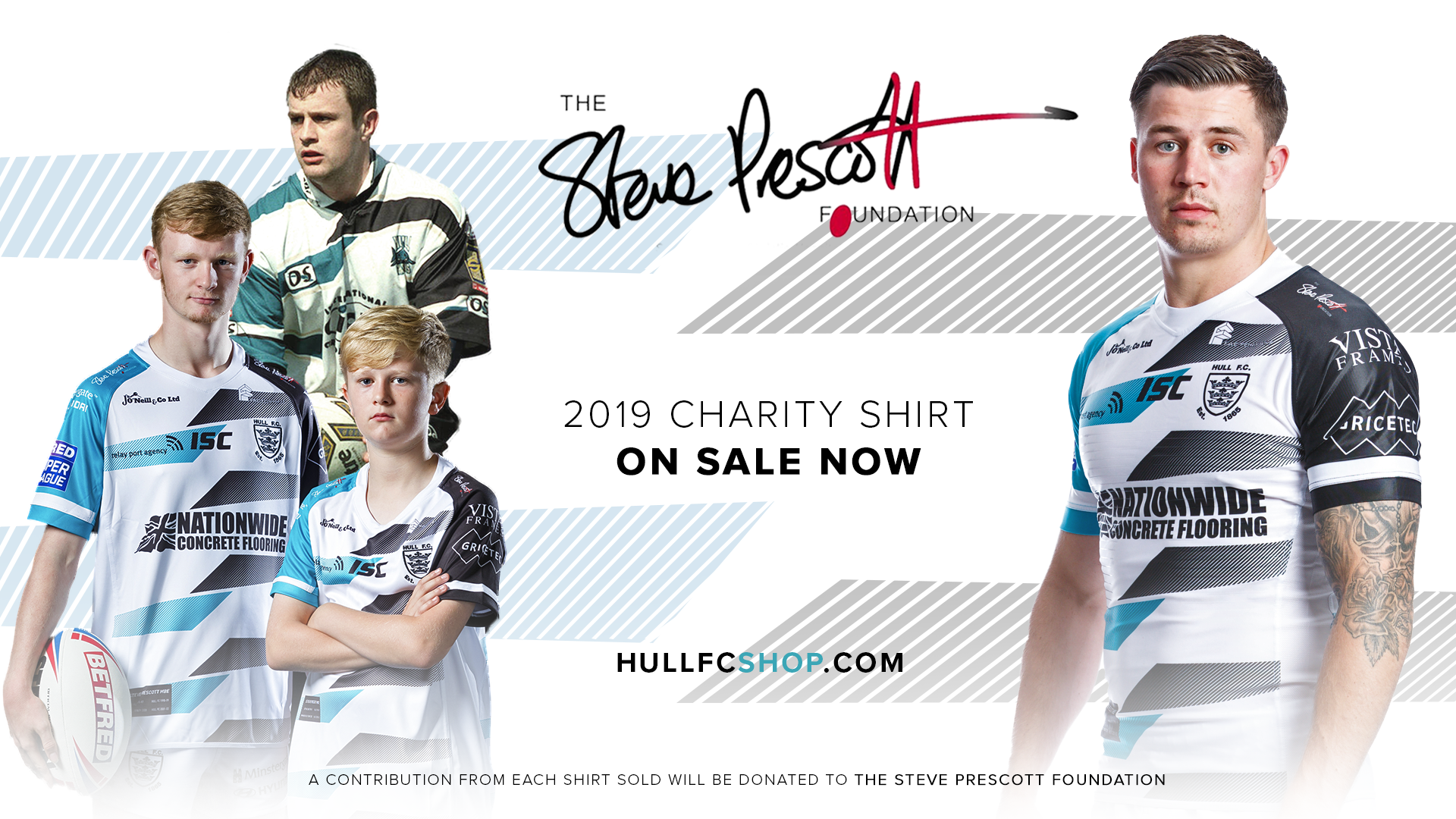 Steve’s widow Linzi, and son’s Taylor and Koby, recently joined the club for the official photoshoot for the new SPF inspired shirt and it brought back some great memories!

Linzi said: “When I first saw the shirt, my mind automatically went back to that first season Stephen first played with Hull back in 1998-99, which obviously the shirt is modelled on. I really like it, it’s a great shirt and it’s great that Hull are honouring Stephen.

“When Stephen was told he had to leave St Helens we were absolutely devastated but it turned out to be one of the best things that ever happened to us. We treated Hull as our home and he was really warmly received by everyone at the club and the supporters when we came both times.

“Anything that continues Stephen’s legacy and to have the boys involved is special for me and all of the Prescott family.

Hull take on St Helens on Friday 13th September in the final game of the Betfred Super League regular season at the KCOM Stadium, with the home side running out in the limited edition one-off shirt in memory of Steve.

Tickets details for this fixture will be announced in the near future.

The shirt is available now online at hullfcshop.com by clicking here, or available in store at the KCOM Stadium and Savile Street from 9am tomorrow morning.

Tickets for the Black & Whites trip to Hull College Craven Park to take on Hull Kingston...

Save 50% On Hull FC Live Subscription

Members can save 50% on their Hull FC Live subscription, with exclusive access to highlights, match reaction...

Hull FC's Community Foundation have been working with the Humber Learning Consortium as part of their...