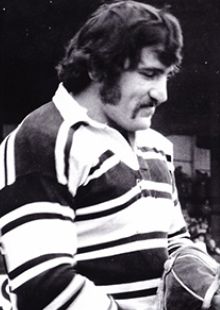 Mick made his early appearances in the second-row, but moved up to open-side prop in his second season.

He played in both matches against the French Under 24’s in 1967 and made his test debut against France in the Spring of 1967.

He was another player who was outstanding in a weaker team for a large part of his first spell at Hull, but medal success only came his way with the Yorkshire Cup victory in 1969.

Mick left Hull in January 1974 for a club record £10,000 to join Leeds, for whom he played in some 215 matches, including Wembley successes in 1977 and 1978 before returning to Hull in 1982, when he featured in the famous game on 16th November 1982 when Hull so very nearly toppled the ‘Invincible’ Australian Test team.