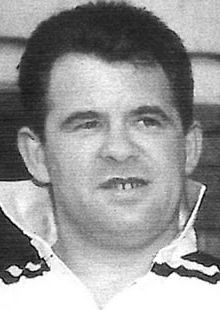 James Gerald Drake was a fearless and feared member of Hull FC’s pack who gained representative honours with Cumberland and Great Britain. He was the older twin brother of fellow Hall of Famer, Bill Drake.

A cornerstone of the Black and Whites’ go-forward in the 1950s, he made 244 appearances for the Airlie Birds.

Jim was signed initially as a full-back, but Roy Francis saw an ability and fierceness which he felt could be utilized in the forwards. He played in the back-row on a few occasions, but it was as a blind-side prop in which he came to the fore.

He was fearless and as hard as all forwards needed to be in those days. He occasionally stepped over the bounds of legality, but if a threat to Hull’s winning pay was in danger, Jim would be the man to deal with it.