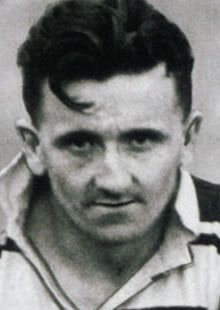 The second highest try-scorer in Hull FC history, Ivor Watts spent nearly 15 years in black and white. Welsh-Born Ivor was spotted by fellow Cumbrian Joe Oliver and persuaded to come to Hull and scored in his first Trial game.

He endeared himself to the Boulevard faithful early on when he scored twice in his first Derby match against Hull KR. He went on to score 15 Derby tries – a record which he held for many years before Kirk Yeaman wrested it from him in 2015. His total of 216 tries for Hull is surpassed only by Clive Sullivan with 250.

He secured a Championship winners medal towards the end of his career when Hull accounted for his home-town Workington by 20-3 at Bradford in 1958.

Watts was Hull FC assistant coach from 1959 before stepping up to head coach in 1970, a post he held for a year.