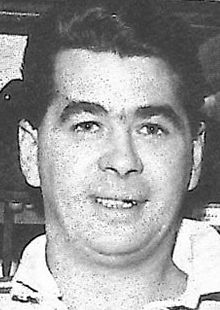 William Desmond Drake was a true great for Hull FC and the twin brother of fellow Hall of Famer, Jim Drake.

Bill was born 10 minutes after Jim and was signed initially as a winger. His early time at the club was spent on the ‘A’ team wing before his debut against Halifax, again on the right edge.

However, like his brother, Roy Francis felt he was ideal material for the type of forward pack then in creation by Francis. Hull’s pack could ‘run like backs and the backs would tackle like forwards’, thus creating a new dimension to forward play.

Bill established himself in the second-row and he became only the third Hull forward to register a century of tries. Like Jim, he was ferocious in his play, but the hardness he doled out was not easily seen by spectators or referees alike! He possessed a long-striding rangy run and he exhibited a ‘dummy’ pass which actually left his grasp coupled with his ability to bring the ball back.

He remains the only Hull player in history to score a century of tries for the first-team and a half-century for the ‘A’ Team. Along with Johnny Whiteley, Bill Drake was a great favourite among supporters.

Bill died in Kingston-upon-Hull on October 8th, 2012, exactly four years to the day after the death of his brother, Jim.