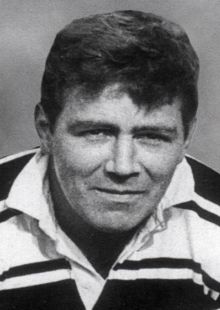 People talk about the brilliance of Kiwi Gary Kemble and brilliant he was, but Hull have had some outstanding full-backs during their history and one of those greats was Arthur Keegan, who was one of the club’s most loyal and popular players during his 13 years service.

Keegan was a class act of the highest order. Why? It was simple really, he had an amazingly high level of consistency – off days for him were rare. His assets were dependability and a clamp-like tackle which sucked attackers in like a giant squid and once in his grip, they never wriggled free.

Added to that, he had the ability to turn defence into attack with his strong running and he was also a useful goal-kicker, registering 318 during his time at the club.

He only made nine appearances for Great Britain and was a shock omission from the 1968 World Cup squad after an outstanding series against Australia just a few months earlier, where he received the man of the match award after a fearless tackling performance in the Test on a frozen Station Road pitch in Swinton.

He did tour Australia and New Zealand in 1966 and scored a try and kicked 62 goals for 127 points in 15 appearances, but only two were Tests.

Possibly the most amazing thing about Keegan is that he had to pay to get into the ground to make his debut against Leeds at Headingley. He was only 19 and his players pass hadn’t come through when he got a late call to play.

Keegan was told he’d be okay but when he arrived at the players entrance but the official didn’t believe that he was playing and refused him entry.

In Keegan’s own words: “He wasn’t going to let me in, it was my debut, so what was I going to do. I had to go through the turnstiles with the rest of the fans. I paid to play.”

Keegan got his revenge because he was an instant success as Hull ran out 32-7 winners.